The audience at the Jersey Boys’ off-broadway production sighed with “oooohs” and “aaaaahs.”

It wasn’t from any pyrotechnics popping on-stage.  It came from the beginning beats of the music (Kind of like: I can name that song in 3 notes).  And when a familiar Frankie Valli tune rolled out…folks sighed, swayed, and let the music travel somewhere deep within them.

That brings me to one of the biggest complaints I hear about CHURCH (or rather REASONS NOT TO GO TO CHURCH. Often people say….

Yes, I know that’ll offend some folks, but if you haven’t heard it before, then you should know…some people….church people, non-church, borderline church goers, young, old…have mentioned this.

ON THE OTHER HAND

When a song that people really like shows up in the liturgy…you can tell immediately.  Voices swell on Beautiful Savior. Everyone knows the words…at least to the first verse. There’s no mumbling like the buzz of the drive-up intercom at a Taco Bell. Nope. Those verses are belted out loud and clear.  Harmony blooms.

What’s a great tune for one person…drives another person to gnash their teeth.  One summer we experimented with blue grass music. Banjos, pickers, juice harps. The whole service. Every service.  Every song. For me…a little went a long way.

I KNOW. I KNOW. SINGING PRAISES ISN’T ABOUT ME.

And while it’s dandy to explain to the MusicSucksPerson why we sing, I’ve found it does little to change attitude.  They either choose not to sing or they go to the bathroom during a song or simply don’t come.

SO HERE’S YOUR CHANCE

Get it off your chest. Take the poll.

What is it about church music you don’t like?  If you looooove everything, that’s wonderful, but you’ve probably heard someone complain about church music. What’d they say? Click the poll button.  You can even enter “other” and tell me about it.  Go ahead. Vote. Then come back and vote again.

The results will be posted on the August 30.

Perhaps, together, we can find the musical way to rattle a few souls out of apathy.

Sixteen bags of garbage.  Oh, excuse me. It wasn’t garbage. It was all stuff that would come in handy someday.

That’s what we found when I helped my neighbor clean out her mother’s house. Forty years of saving  stick-on bows, aluminum pans, and extra sets of dishes.  My neighbor had wheedled and cajoled, trying to get a head start and purge the place before her mother passed.  But the old matriarch wasn’t interested, waving a hand away and saying, “I don’t have the energy, honey.  Do it after I’m gone.”

Mostly the bags were filled with garbage we’d found festooned between financial papers and coupons that had expired in ’92.  But there was one rare find.

A box. Inside were love letters between my friend’s mother and father during the war. And home-made cards she’d  crayola’d  as a kid.  She held in her hands the knittings of her family’s love that had made it all the way into the future.

Things have changed.  We rarely write letters on paper anymore. I love getting them, but I’m guilty about not writing.  Instead I use technology. That’s why a recent news article popped a light bulb over my noggin.

Some families are bemoaning the privacy policies of internet sites.  If you use on-line bill

pay, internet banking, or communicate with e-mails, those accounts aren’t accessible to heirs after you die.  Your Facebook, Pinterest, or Google account can be shut down with the proper certificates, approved paperwork and sometimes legal wrangling, but you don’t have access to content.  For example, if nothing is done, those e-bills will go on forever, piling up in the deceased’s Yahoo mail, but the family won’t know anything about it because they can’t access the account.

This is birthing new legislation, but for now, attorneys are recommending leaving a list of usernames and passwords (and instructions) with your will.  EX:  Download the family pictures and delete Vegas Weekend pictures from PhotoBucket.

But I had a better idea for this man-made perpetuity.

With a little creative scheduling, I could blog far into the future, even though I’d actually be singing in the heavenly choir.  Long after I’m gone I could wish the kids Happy Birthday each year. I could schedule posts 50 years from now to nag my great-great something-or-others into doing better in school, getting  jobs, or going to church more often.   Messages from beyond the grave.

When I shared this with the kids, they shrugged, telling me technology would change by then.  Besides, they’d prefer I leave a letter.  Something they could hold.  A missive with my funny-looking Rs and loopy Ys. A note that crinkles and makes noise when folded and refolded. Maybe even one that carries a scent.

I know what they mean. I love holding my Dad’s teensy-tiny Bible. He rarely talked about his beliefs, but I learned so much from the underlined passages and notes he made in the margins.

Things change. Things stay the same. So I’ll write my afterlife messages in a letter.  And I plan on passing it along in my Dad’s tiny-little Bible. Now if I could just figure out how to add the scent of homemade bread.

Look…Lutheran Ladies know stuff.  It might be the lint of the Universe or ponderous enough to stump Rodin’s thinker, but here’s what Betty in Chicago wants to know.

“Our Pastor is meeting with the twenty-something-year-olds at the local pub. It’s a family friendly place and I understand they tackle any topic, but now I can’t get my son to go to church. He thinks this fills the bill.  How to convince him this isn’t worship?” 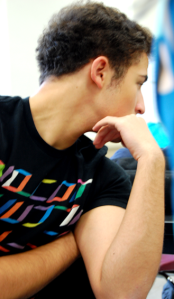 Oh, Betty. Betty. Betty.
You didn’t mention underage drinking, pole-dancers, or head-banging music, so I’m assuming this isn’t a problem with the location, it’s about sitting in a pew on Sunday mornings.  Or what younger people like to call “forced worship.”

Here’s Plan A:  which I wouldn’t recommend because it’s an epic fail.

Plan A: Some doofus (like me) says, “Hey we need more young people in church, and because they think the service is boring, let’s have a service on another night, crank up the music, and spice up the homily with powerpoint or videos.  Hoooray!!!

And no one comes…well barely anyone.  Because…well…it’s like my tenure at Big-Mart and we started every (EVERY) meeting with the company song and hand waving.  And let me tell you, no one ever said…”I can’t wait to get to the meeting and sing.” Think about it—lots of folks don’t like to sing. Faster, louder music is not a magnet. And when was the last time you were yowzered up about a Powerpoint presentation?

So, maybe your pastor went with PLAN B and asked  your young pubbers, “How do you want to worship?” And one or more said….

“Stop talking at us.  We’ve got questions. “

So he’s meeting them where the clink of glasses make the pizza and questions about war, sex, stealing, and dealing with the pressure of work and classes flow into conversation.

Sure…you perhaps could force your son to worship. Tell me how that works out for you. For him?

In the meantime, find out if your pastor needs support (buying food, providing transportation). Young people aren’t coming to the church, so the pastor  is shouldering a backpack of caring and going out where they are, creating and satisfying a hunger.  I’d say it probably gets the job done better than wailing or clapping to a song on Sunday morning if they don’t want to be there..

Plucking One String is now available at Barnes and Noble (Nook), Amazon (Kindle) and Smashwords. Links and description/details below the cut.